Baby photos: Should Bounty be allowed to snap newborns?

These are external links and will open in a new window 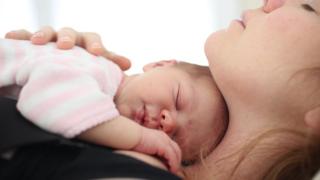 Mothers-to-be can be served up an overwhelming amount of information and advice prior to giving birth. What many are not told about, however, is they could get a visit from a professional photographer while on the maternity ward recovering from delivery.

The service is offered at more than 150 UK hospitals by pregnancy firm Bounty, which, as well as selling the photos, distributes free samples and vouchers to new parents in packs given out at maternity appointments, baby sale events and through its apps.

The company, which was formed in 1959, said its research indicated the vast majority of new mothers expected and welcomed a hospital visit from its reps.

But some claimed the presence of Bounty staff was intrusive and have questioned whether a postnatal ward was an appropriate place for a money-making service.

Sarah Jackson White, 37, from Glossop in Derbyshire, was visited by a Bounty photographer at Tameside General Hospital in October.

She said she felt the company should not be allowed to canvass for business from new mothers in maternity wards.

"I felt pressurised into having a photoshoot, even though I said I already had one booked for the following week," she said.

"Of course when the lady showed us the preview clip, we felt overwhelmed and bought the whole package.

"Looking at the photos now, I wouldn't have bought them if I wasn't so emotional. I've never even displayed one."

'I was trying to breastfeed'

Rebecca Corcoran, 32, from Burgess Hill in West Sussex, said she was approached twice by a Bounty representative after giving birth at the Princess Royal Hospital in Haywards Heath in June 2018.

"Bounty came to me on the second day I was there but I refused as my daughter was unwell," she said.

"The lady came back on the fourth day. I had the curtains shut and was trying to breastfeed my daughter who was still unwell.

"She opened the curtains and just said, 'I'm blah-blah from Bounty and we won't be here over the weekend so I have to take pictures now'.

"With everything going on, I just agreed. I never bought the pictures - I had my own done when at home.

"I felt uncomfortable and my privacy invaded and pretty stressed.

"I am pregnant now and I do not want Bounty to visit me when I'm in hospital because I won't be so quiet this time."

But not all new mothers have found it a negative experience.

Demi-Louise Pashley, 25, from Tibshelf in Derbyshire, gave birth at King's Mill Hospital in Mansfield in March 2016 and October last year and said she was happy to be photographed by Bounty on both occasions.

"With my first child, although I was in need of a lot of care afterwards, it was lovely to have someone come and fuss over you and your baby," she said.

"Although I felt awful, I wanted my baby's photos taken for that amazing keepsake and memories of those first few moments.

"We bought a large pack but knew the expense would be worth it to have those pictures to treasure.

"It's all down to personal choice. If people believe strongly it's something they are being pressured into, then possibly there should some sort of opt-out form when women are completing their birth plans."

Kelly Williams, 37, from Ripley in Derbyshire, was 16 when she and her first child were snapped by a Bounty photographer at the City Hospital in Derby, in March 1999.

She said: "I was approached by a midwife first who asked me if the Bounty photographer could pop on to the bay I was sharing with four other women.

"I was very tired so asked if she could pop back the following day, which she agreed.

"The photographer was very kind and approachable. I was never pressured into anything.

"She sat with me and to be honest it was nice to have someone to chat with, especially being a young mum.

"I think pictures are important and I hope Bounty continues to take time to go on to wards, to capture these moments for women.

"If you don't want them taken, just say no it's as simple as that."

Why do hospitals allow Bounty in?

NHS England said it had no national agreement "of any kind" with Bounty and any deal to allow the firm into postnatal wards would have been agreed with individual hospital trusts.

One of these is the University of Leicester NHS Trust, which revealed at a recent health scrutiny meeting that it earned £5,647 in the first six months of 2019 from allowing Bounty into its two hospitals.

Strategic director Mark Wightman said a fee was paid for every Bounty bag handed out and a percentage of the profits made from photography sales was also paid to the trust, with both contracts periodically reviewed.

Elaine Broughton, the trust's head of midwifery and nursing, said money made was used to replace equipment on the wards.

But Leicester city councillor and mother-of-two Melissa March said the trust's contract with Bounty made her feel "really uncomfortable".

Speaking at the meeting, she said: "If it were any other kind of post-surgery or recovery ward and photographers were coming in and taking photos of you and your child and the hospital was receiving remuneration for that, it does feel deeply intrusive.

"It's the most vulnerable you might ever feel, I couldn't get out of bed.

"Also, sometimes you've been awake for five days straight, you don't know what on earth to do with this tiny human you've just had and then someone comes in to take photographs."

In 2018, Mid Essex Hospital Services NHS Trust introduced an opt-out card to allow mothers to request they were not approached by anyone from Bounty while on a maternity ward.

The trust said the scheme had proved to be "a great success" and was still in operation two years later.

And questions had been asked about the arrangement before. In 2013 parenting forum Mumsnet called for Bounty's sales reps to be banned from NHS maternity wards, criticising the firm's "harassment tactics".

What does Bounty say?

Bounty's website pointed out the photo opportunity was the only "sales" part of its representatives' roles, and said about half the new mums they saw opted to have the portraits taken.

The firm told the BBC great care was taken by its representatives when they were allowed on to postnatal wards.

A spokesperson said: "Bounty fully supports and acknowledges the need to respect the privacy and dignity of families on the maternity ward.

"We are committed to ensuring every mum we meet in hospital experiences an excellent bedside service from our staff.

"Research shows that the vast majority of new mothers enjoy, expect and welcome our services.

"Bounty has been meeting mums in hospitals for over 60 years, providing essential support and information to generations of new parents.

"We work closely with the NHS to ensure our services are offered on the basis of choice and that they comply with the standards required by our hospital partners."