Ever since the first episode of The Mandalorian introduced the world to the tiny green wonder that is The Child (A.K.A Baby Yoda, A.K.A. everyone's favorite son), Star Wars fans have clamored for a chance to take him home and love him forever.Â

After four long months of anticipation, Disney finally revealed all of the Baby Yoda toys, clothes, and merch available to purchase â€"Â including a talking Baby Yoda doll, a Build-A-Bear, and the cutest darn Lego minifigure in the galaxy. 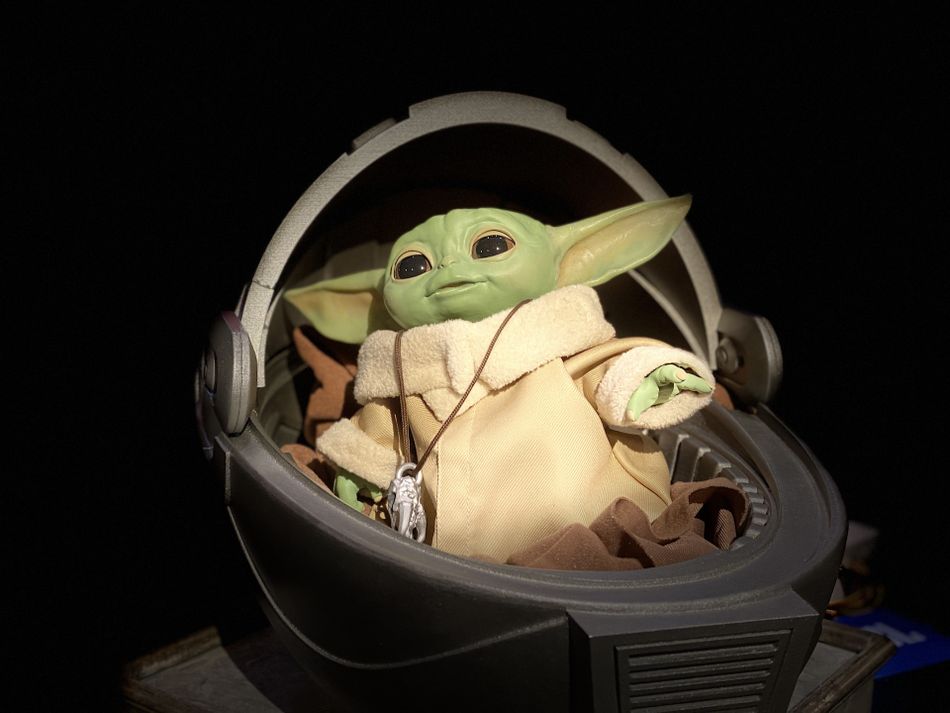 Look at him. Look. At. Him. A still image cannot convey how adorable it is when this fella perks his ears up, blinks, turns his head, and coos like the lil baby boy he is. The Child Animatronic Edition is remote controlled for optimal posing and on-demand cuteness, and is shockingly affordable with a $60 price tag from Hasbro.Â

Unfortunately, the hover-pram shown in this image was only for show and does not come with The Child animatronic doll. It doesn't hover IRL either, so we'll call it a wash.Â

The Child one-inch figures, Talking The Child figure, and one that doesn't talk as much 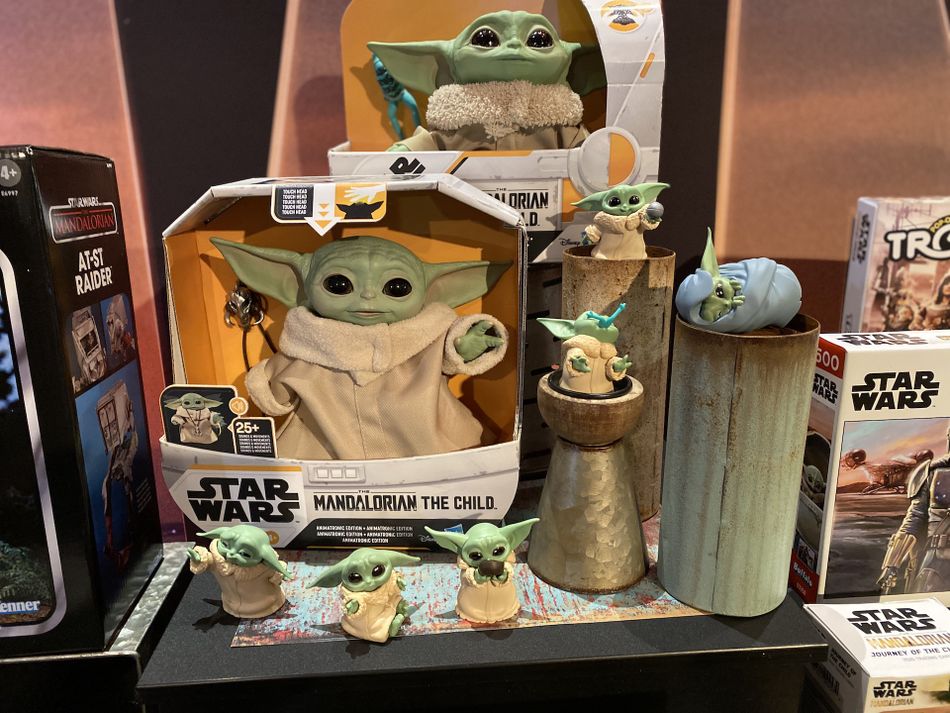 In addition to the animatronic, Disney also showcased the previously announced action figure line that sold out at Target and other retailers late last year. These include a talking and non-talking The Child figure and a series of one inch "fixed pose" toys featuring Baby Yoda in swaddling clothes, chomping a frog, sitting down, and doing the magic hand thing.Â

It's more Baby Yodas (Babies Yoda?) than you can shake a stick at. What a time to be alive. Â 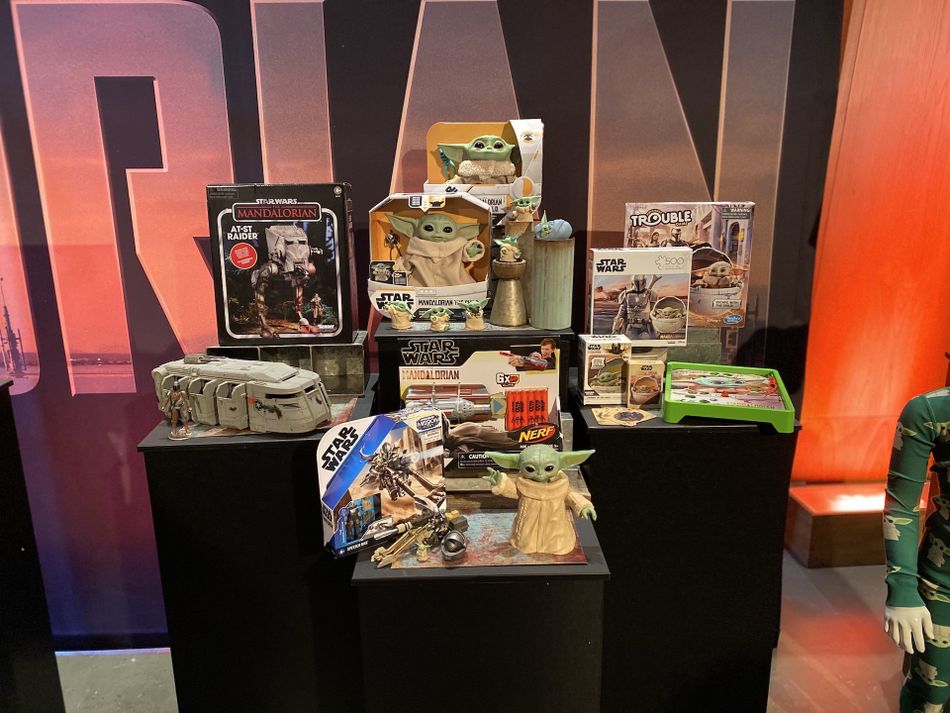 Baby Yoda 'Operation' is an interesting choice, but we'll see where this goes.

Also on display with the one-inch figures was a larger line of Disney+'s The Mandalorian action figures, a 500 pc puzzle starring Mando, smaller Baby Yoda figures (look on the center right), and two themed board games from Hasbro: Trouble and Operation.

Don't worry, the new Operation doesn't have you doing surgery on The Child (but wow, bold choice if it did); the game appears to be about taking the baby's toys away without alerting him.Â

Waitâ€"what? That's not worse, per se, but it's not great either. 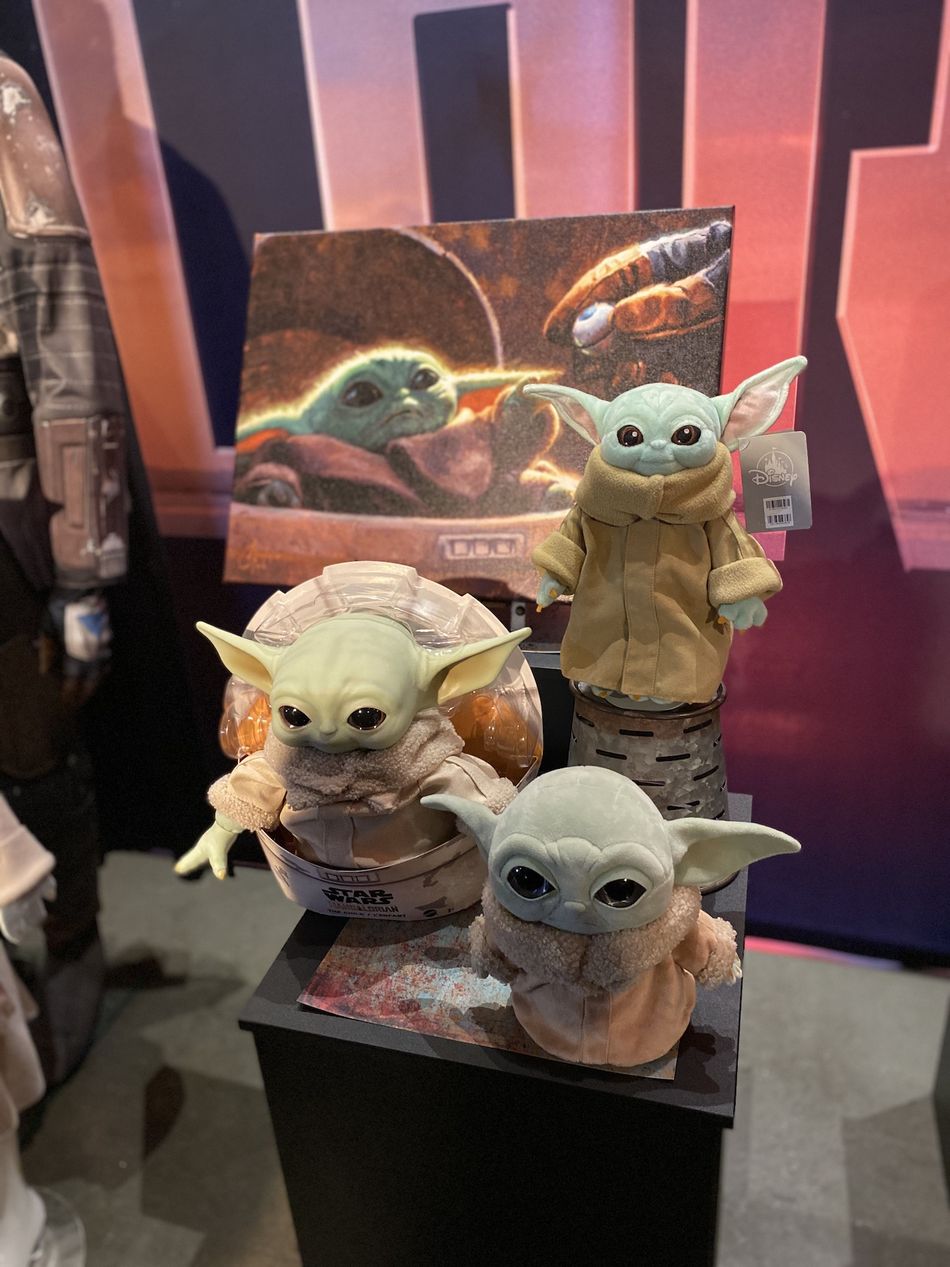 Of course some would prefer a softer Baby Yoda experience, so there are also three pre-made The Child plushies coming later this year to the Disney store and other participating retailers. The one on the left has a huggable body, whereas the two on the right are soft and squeezy all the way through.Â

The baby up top is even posing for the camera. What a good boy, I can't.Â 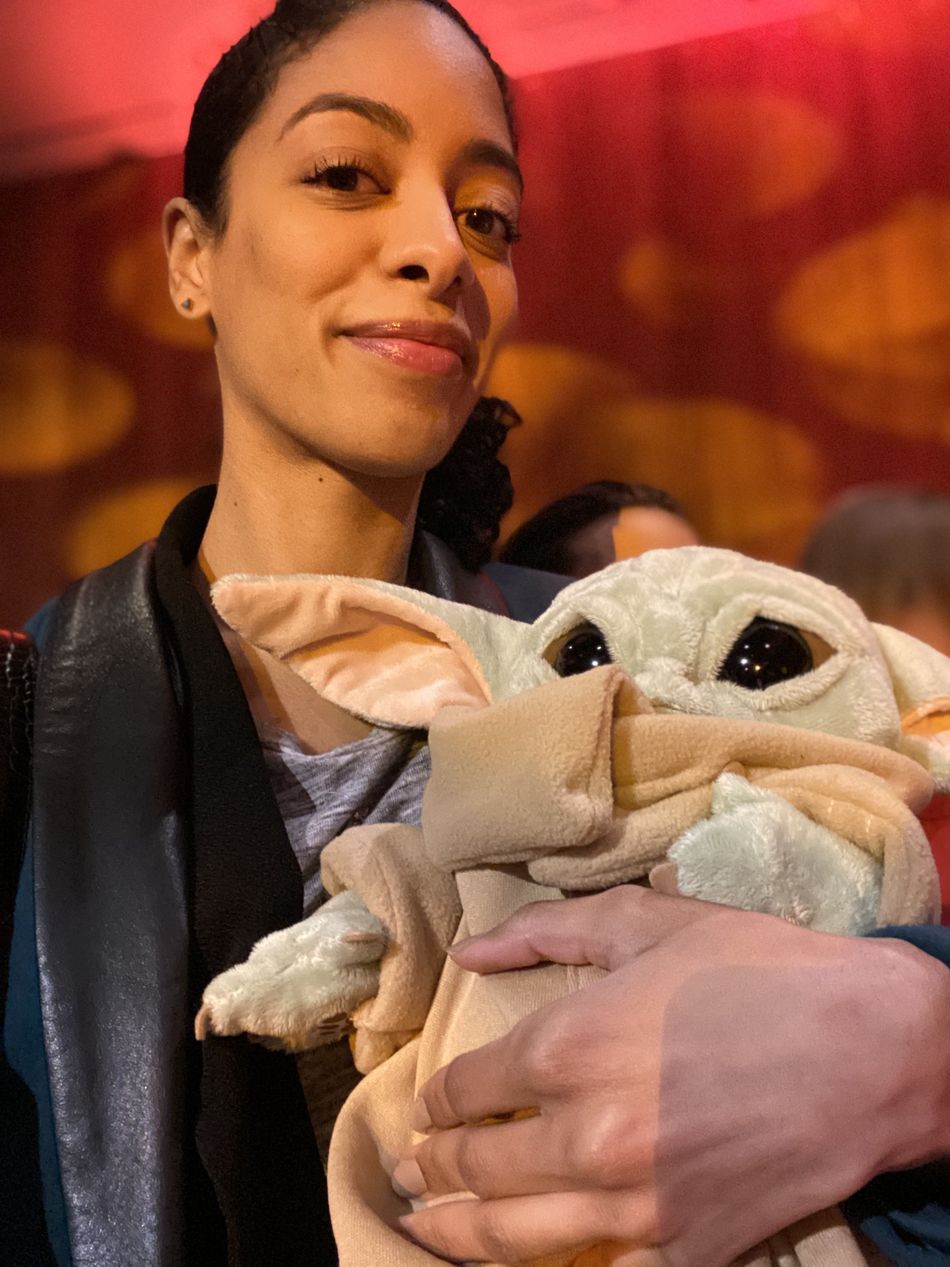 One of the most anticipated The Child toys is the Build-A-Bear, which will be available later this year. As someone with firsthand experience building this particular "bear," let me tell you...it's still super weird when they hook him up to the stuffing machine and fluff him up. One second you're holding a flat Baby Yoda skin and the next you have a friend. Try not to think about it too much.Â

The finished product is, however, precious and just the right size to perch on your lap for take The Child to work day.Â 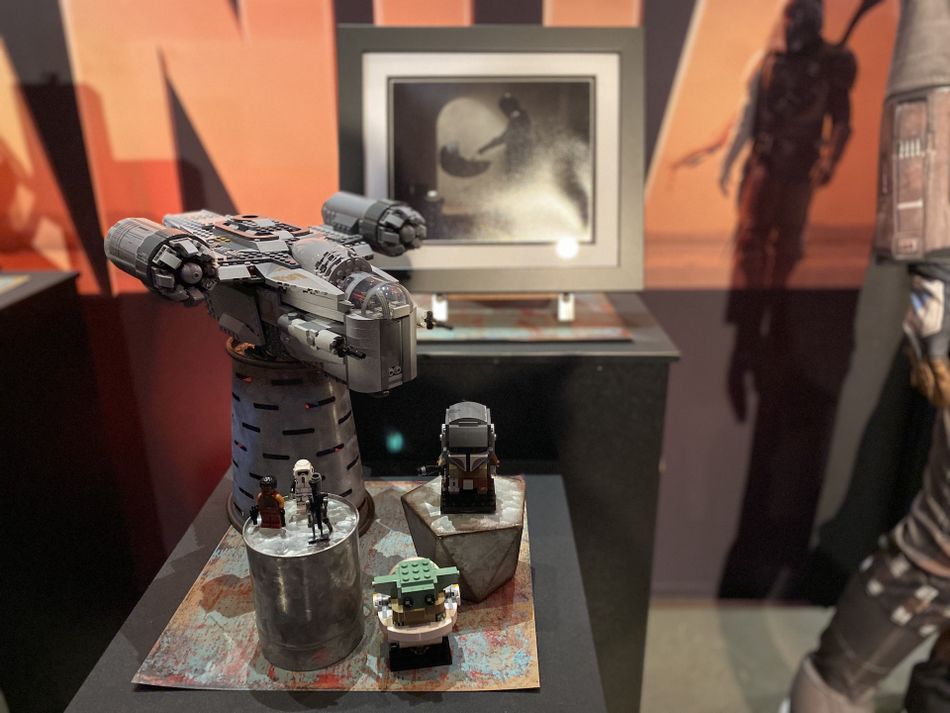 The Mandalorian's janky ship looks pretty good in lego form, as do his pre-beskar armor and droid buddies.

Speaking of building, the Lego Razor Crest and Mandalorian/The Child Brickheadz are also coming soon. Not pictured in this set is the ridiculously small The Child Lego minifigure, which is roughly the size of a fingernail and probably not suitable for small children.Â

To make up for the lack of minifigure on display, here's a close-up of The Child's Brickheadz: 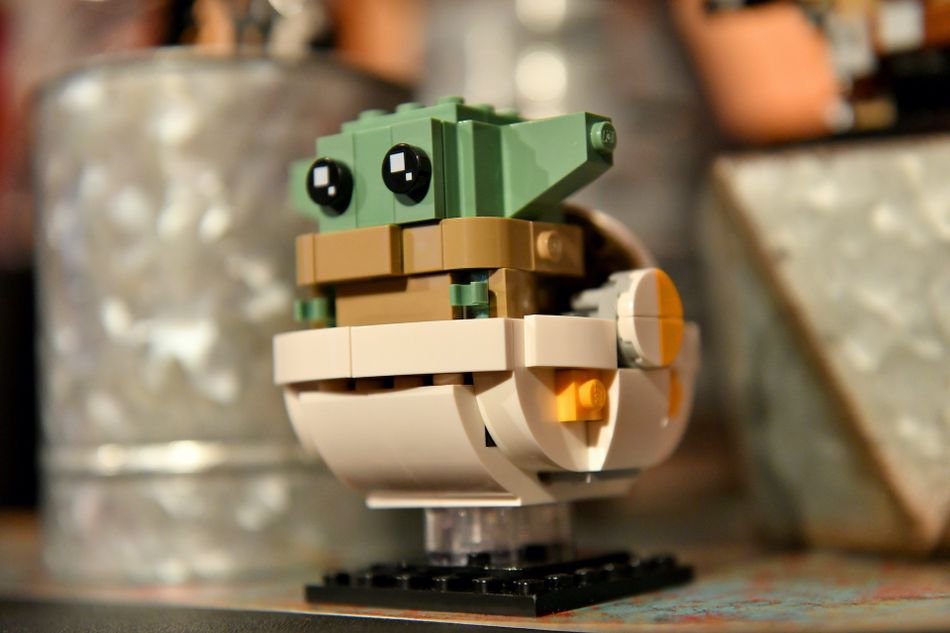 Are you kidding me? Those little beady eyes? I'm crying. 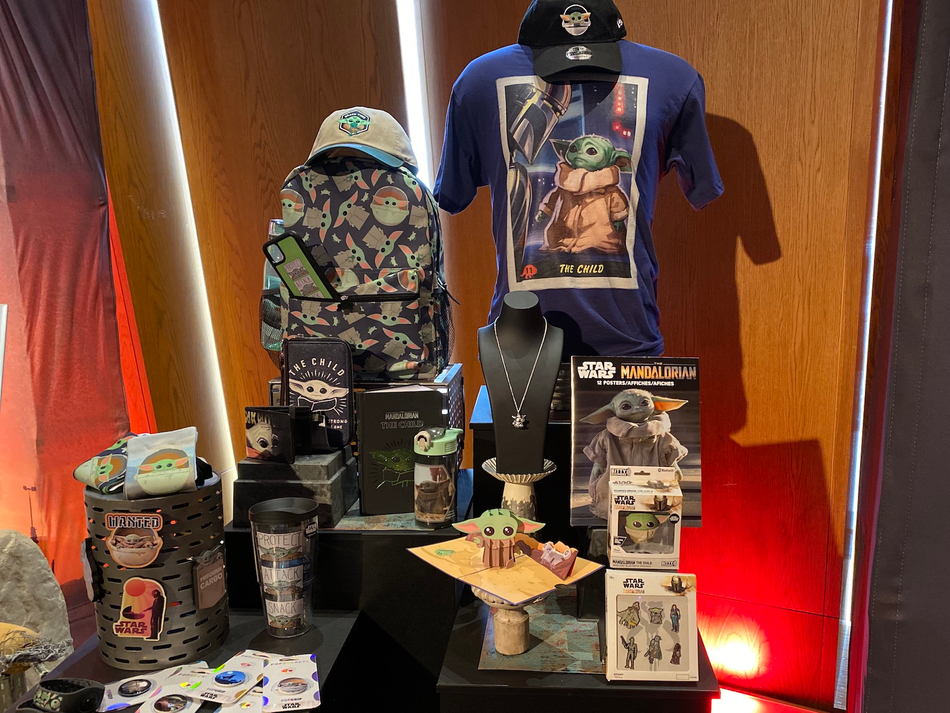 Are you not entertained?

Just in case anyone was worried the merch line was limited to toys and action figures, here's at least a dozen other ways to show how much you love Baby Yoda from the bottom of your heart, the top of your head, the front of your chest, the contents of your mailbox, and the depths of your wallet.Â

Here's a close-up of the backpacks, notebooks, and iPhone case:Â 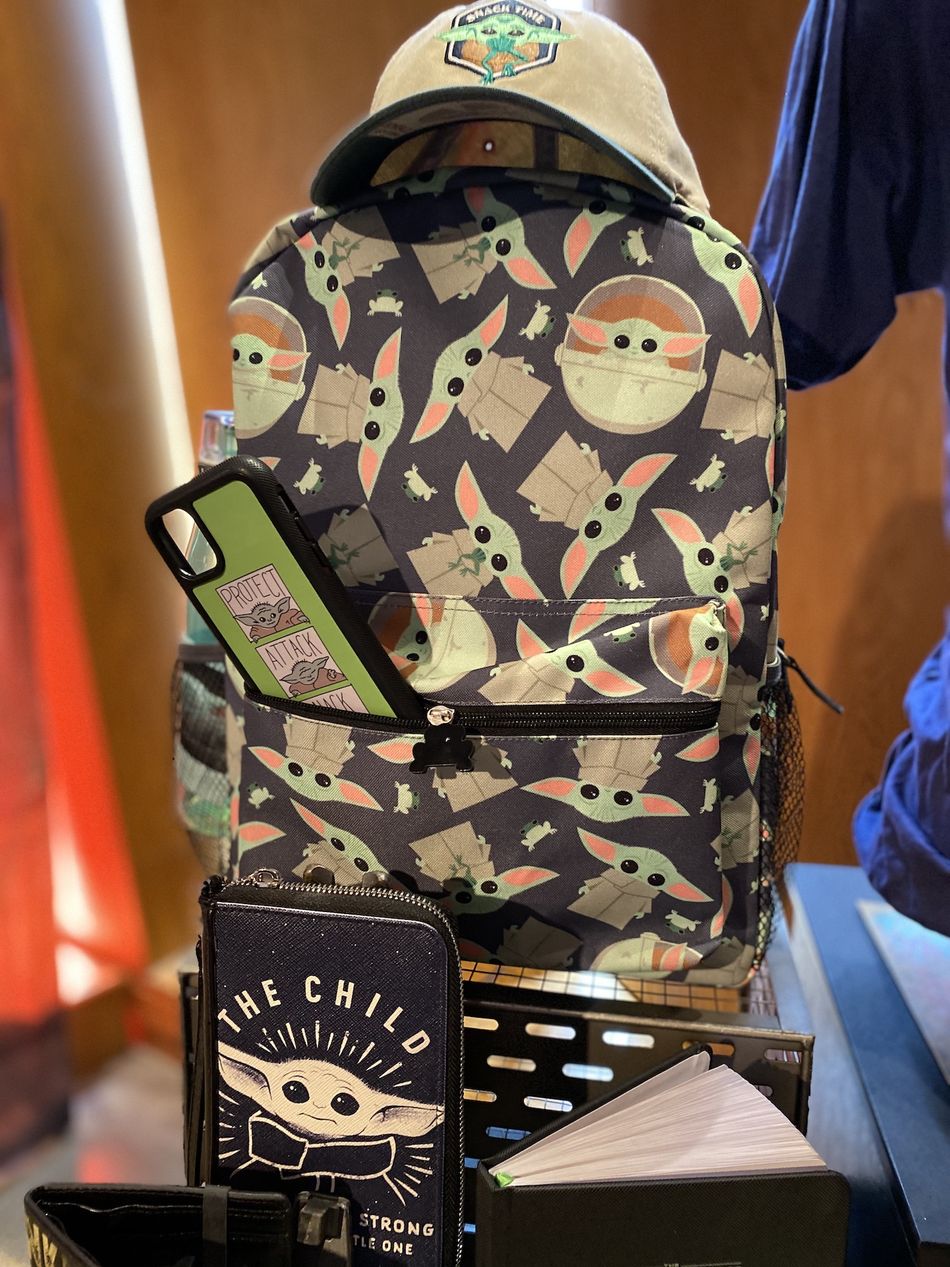 The Baby Yoda iPhone case says "Protect, Attack, Snack" because the memes are strong with this line.

And another image of the pop-up greeting card and a Bitty Boomer, with some dope The Mandalorian character pins on the right. 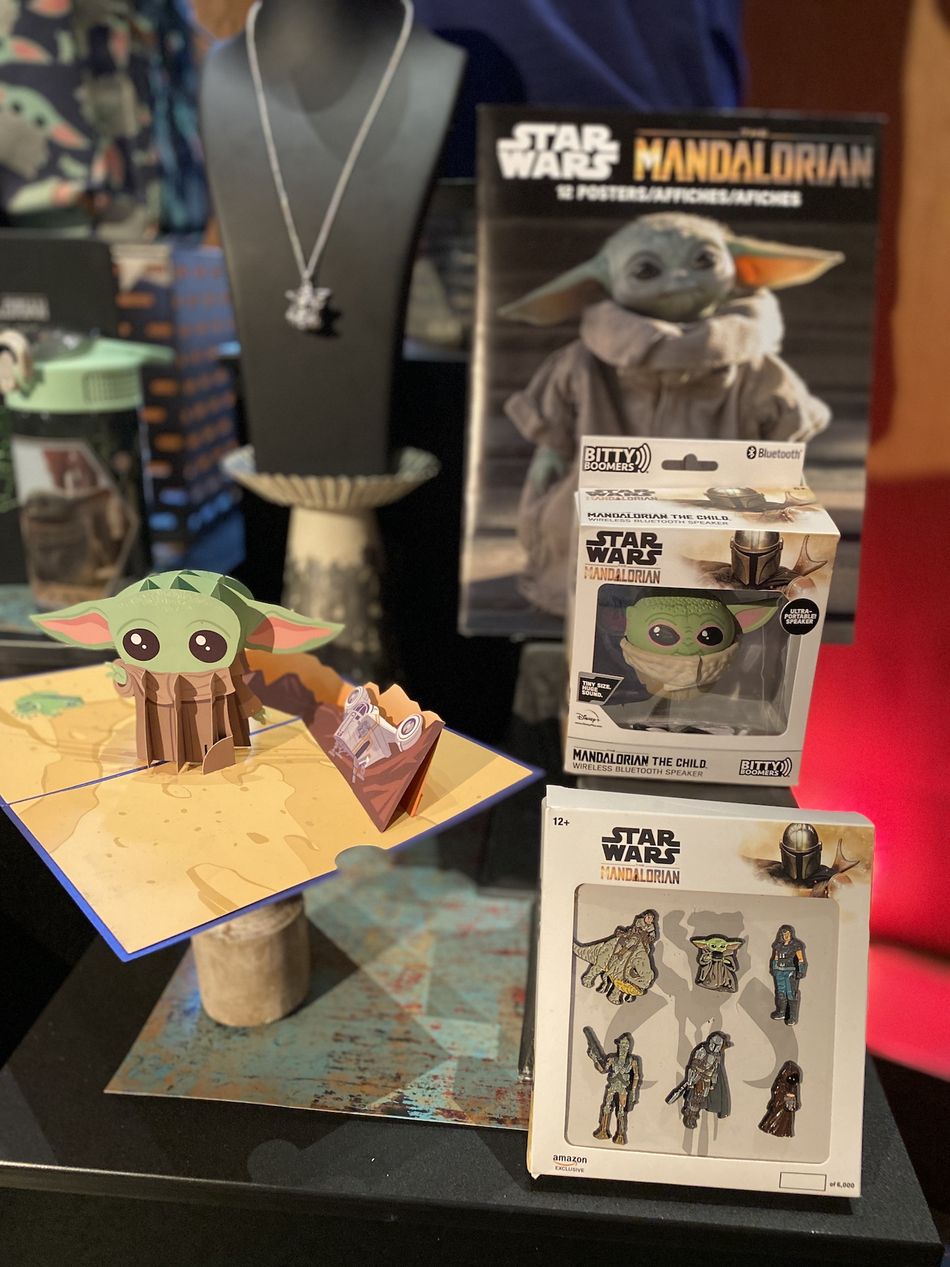 Baby Yoda aside, that Mando pin set is pretty sweet.

More Baby Yoda shirts, some very cute pajamas, one of many beanies, and a bike! 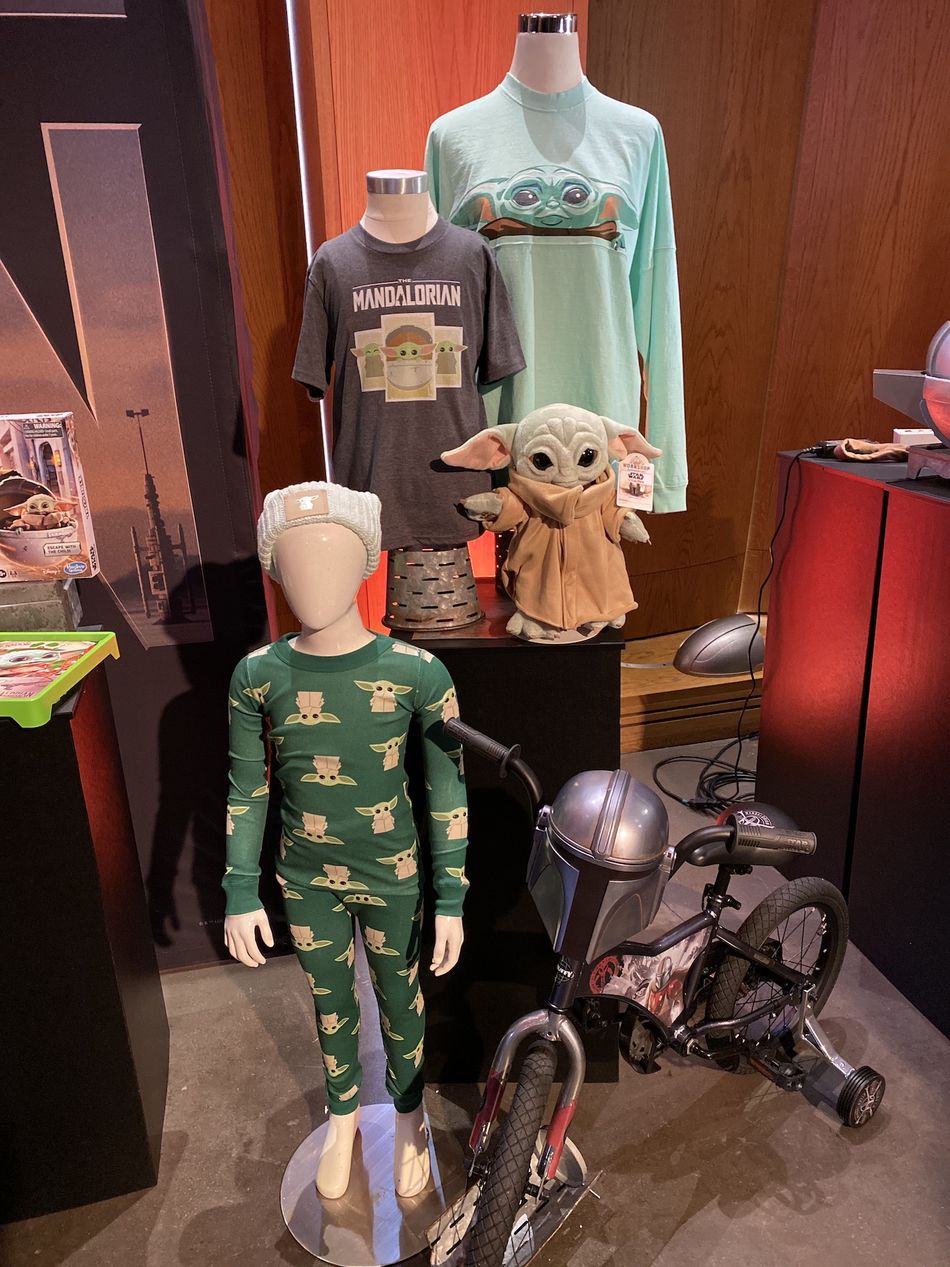 Ok but do the Baby Yoda pajamas come in an adult size? Asking for an adult.

Note: the Mandalorian helmet on the bike is a decoration and not an actual bike helmet. It will not protect you.Â

Second Note: the plushie shown is the display for the Build-A-Bear.Â

And of course, official Mandalorian and The Child costumes 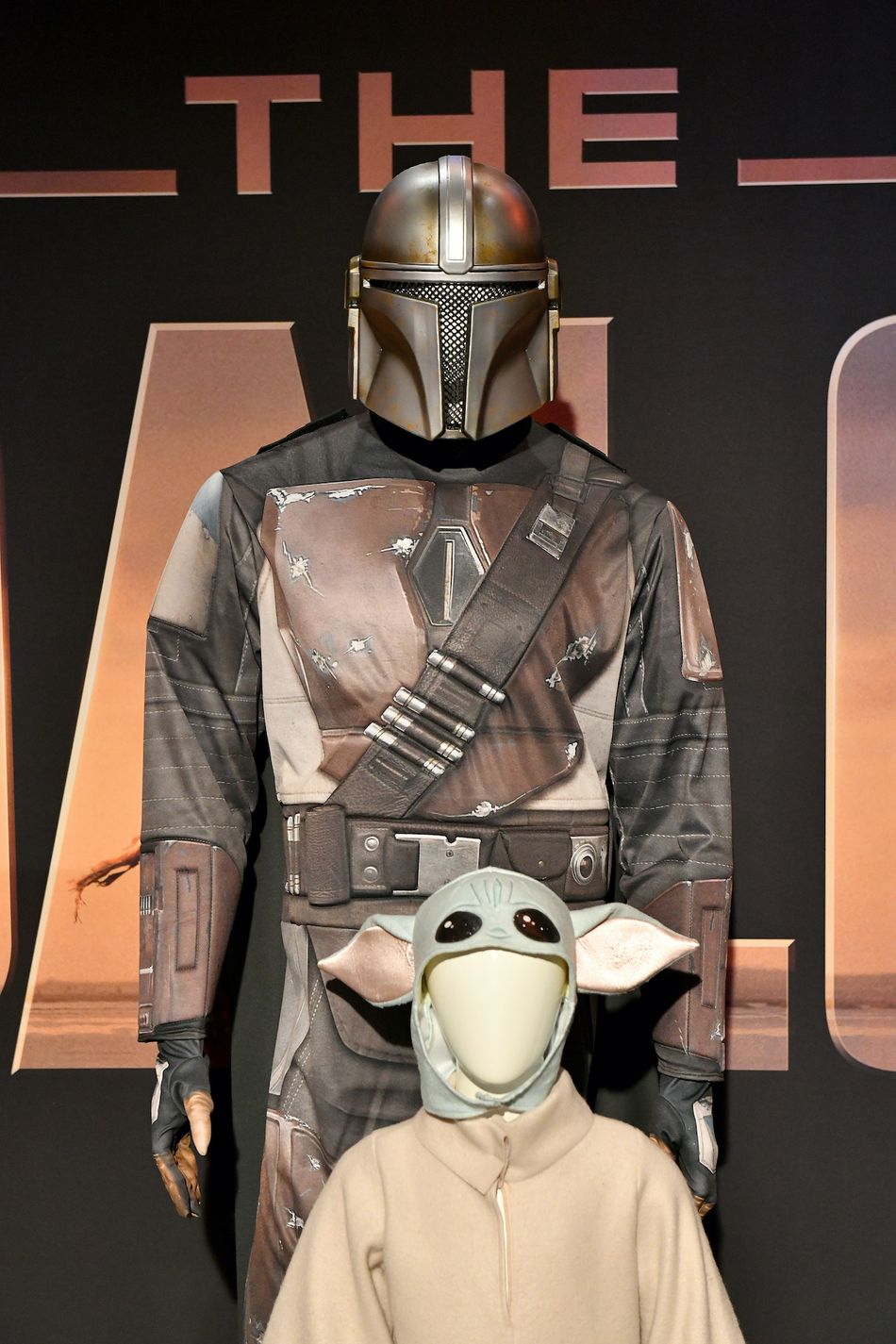 Happy early Halloween, or and random Tuesday if you're one of those year round costume type of folk.

Again, I know a lot of this is for children because Star Wars is "for" "children," but it's imperative that someone tell me if they will be manufacturing that Baby Yoda costume in adult sizes.Â

It may have taken a while for Disney to get the ball rolling on their Baby Yoda merchandise, but they had a good reason for waiting this long â€" the surprise of seeing The Child for the first time ranks as one of the all-time best Star Wars moments. Some of the merchandise shown in this post, including The Child Animatronic Edition, is available for preorder on shopDisney starting today, while the shirts, socks, and other wearable items are ready to buy right now. Other pre-ordered merchandise is set to arrive in the Spring.Â

Disney did not provide a release date for the rest of the toys here, continuing to promise that everyone can take a piece of Baby Yoda home "later this year."Â